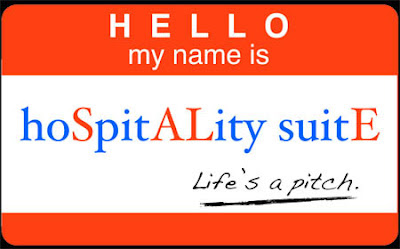 Greetings gang! We received a big announcement from our friends at Claochlu Studios who are performing their theatrical production of Roger Rueff's Hospitality Suite starting tonight at 8PM at Pittsburgh Filmmakers (477 Melwood Avenue in the Oakland section of Pittsburgh) with continuing performances on Fridays and Saturdays at 8PM and Sundays at 2PM running until March 11th.


The play itself surrounds 3 salesman confined to a hotel room in Wichita, Kansas -- each at crossroads in their life where talk of the sale turns to torrential questions of loyalty, life and death. Featuring Jeff Monahan, Everett Lowe, Matt Henderson, and Joseph A. Roots. Directed by Joanna Lowe.

That's not all! Every week brings something new to the show! For the second week a soiree will be held after the performance on Saturday, March 2nd that will give Claochlu an opportunity to share some of their upcoming projects with the attendees along with Jerome Wineck and the Old Hats who will performing a live concert. A trailer for their newest film project will also be presented along with a talk about the Shakespeare Sonnets, a film project that Claochlu is currently raising funds for as part of their Kickstarter campaign. For the third weekend, the playwright/screenwriter will be dropping by for a talk-back about the challenges of stage to film with the audience.

Tickets for the event are $20.00 each with reservations and more info that can be obtained at the Hospitality Suite on Facebook, cupajoprod@gmail.com, or by phone at 412 334-3126. Sounds like a blast kids! The gang from Pittsburgh Underground hopes to see you there!


Claochlu Studios (pronounced Klay-kloo is Gaelic meaning 'transformation') is a collaboration between Cup-A-Jo Productions (a theatre company) and 72nd St. Films with their main goal being to tell a story whatever the means or media, creating a unique experience for our supporters. This goes hand-in-hand with Cup-A-Jo's long-term mission of using theatre as a platform to promote other medias and artists of other medias for a collaborative end.