Movies That Have Everything: The Dead at The Hollywood Theater TONIGHT!!! 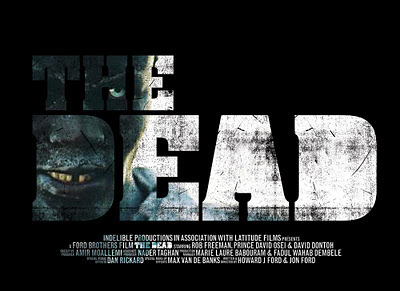 Hey gang! What can we say - one holiday down, two more to go! With that said tonight is the night the gang here at good ol' PU have been waiting for - the premiere of THE DEAD tonight at the Hollywood Theater!

So what the hell is The Dead? It's only the FIRST zombie road movie set against the spectacular vistas of Africa, the Dark Continent! That's right kids - Shot on locations in Burkina Faso and Ghana, West Africa, The Dead tells the story of  an American mercenary Lieutenant Brian Murphy (Rob Freeman - Saving Private Ryan), the sole survivor of a plane crash, who has to run the gauntlet across Africa, battling with the living dead as he joins forces with a local military man, Sergeant Daniel Dembele (Prince David Oseia), as he desperately searching for his son amongst the chaos as they fight together to survive.

A stunningly shot horror fantasy announcing the arrival of the Ford Brothers on the global genre scene, THE DEAD is as much an emotional journey through terror terrain as it is a physically demanding and beautiful-looking one. Shot in life-threatening, never-before-seen locations in Burkina Faso, French-speaking West Africa, and Ghana, including the Sahara Desert, on 35mm film by the award-winning Ford Brothers, THE DEAD is one of the most unique zombie movies of all time.

The fun begins tonight at 7PM with a second showing at 9:30 PM at the Hollywood Theater in Dormont, PA. Can't make it tonight? No worries - The Hollywood Theater has you covered with an encore showing this Friday at 7PM. Hope to see you there!
Posted by Pittsburgh Underground at 11:30 AM