Movies That Have Everything Preview: World Premiere of It Came From Yesterday NEXT WEEK!!! 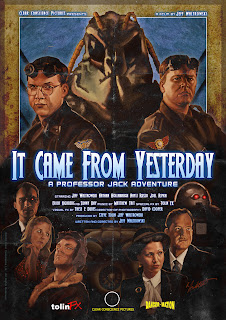 Bubbly bombastic bug-breath my minions!!! If you love sci-fi adventure - if you can't get enough nostalgia from the 1940's - if you are desperately searching for fantastic flicks from the Pittsburgh indy movie scene the get your butt's over to the Hollywood Theater in Dormont NEXT MONDAY for the world premiere event for It Came From Yesterday!

It Came From Yesterday (My Night Trailer)
Clear Conscience Pictures

This amazing, three year long labor of love was created exclusively in Pittsburgh by underground film producers Jeff Waltrowski and Steve Tolin of Clear Conscience Pictures starring Jeff Waltrowski as Professor Jack Cranston as he launches into unknown realms of adventure. With the help of his sidekicks, Buddy and Penny Precious of The Electric Club, Jack must unravel the mysterious plot of interdimensional insect-like creatures hell bent on enslaving the entire human race.

I was lucky enough to attend a press preview with the cast and crew (who incidentally were AWESOME!) of this fantastic flick and all I have to say is I was BLOWN AWAY by the adventures of Professor Jack and his gang of intrepid explorers! The quality of the special effects and the detailed design work of this fully realized 1947 sci-fi spectacular is masterfully executed by Tolin and Waltrowski in every frame of film, along with their apparent love of the genre.

In a nutshell you NEED to see It Came From Yesterday for yourself (seriously, would I steer you wrong?). The big show begins at 7PM on Monday, October 17th with a second showing on Tuesday, October 18th at the Hollywood Theater in Dormont. Don't forget - ADVANCED TICKETS SALES are only $10.00 so get 'em while their HOT!!!

ALSO!!! Stay tuned to Pittsburgh Underground for my EXCLUSIVE PU INTERVIEW with the creators of It Came From Yesterday - Jeff Waltrowski and Steve Tolin from Clear Conscience Pictures. All the answers will be posted right here at 11:30 AM Monday, October 17th before the evening of the premiere event!
Posted by Anonymous at 11:30 AM