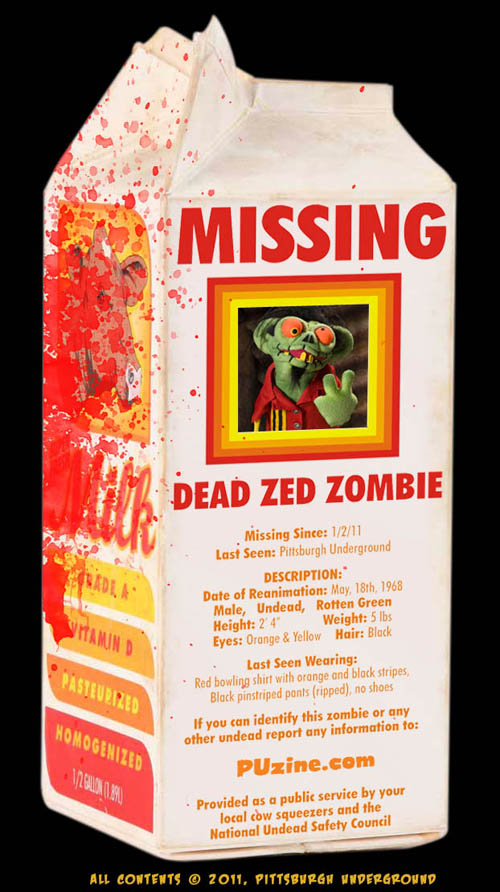 CALLING ALL CARS!!! We have a full-fledged ZOMBIE ALERT and Pittsburgh Underground needs your help!!!

It's been nearly ONE YEAR since our old pal Dead Zed Zombie made his first appearance to the world on our 2010 Halloween Special). His anniversary is fast approaching and the rotten green bastard is no where to be found!

I know you've been all patiently waiting for Dead Zed to make another appearance - we're as anxious as the rest of you... After our New Year's Day Spooktacular aired last year, Dead Zed went ape-shit crazy on one of his infamous holiday benders. He ruined our PU Master Control Program (seriously - zombie urine is a IMPOSSIBLE to get out!), stepped on Rico Rocho (luckily being a cockroach, he was able to squish down before he could splatter), and then tore out of the Pittsburgh Underground sewers on a rampage! 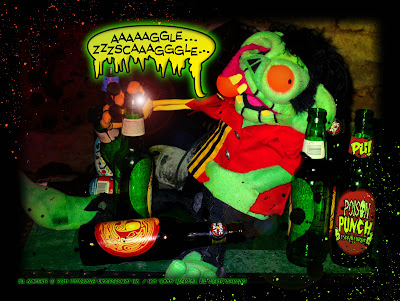 This is SERIOUS STUFF KIDS!!! Do you know the kind of damage that a half-crazed zombie can do to a city? Especially one that hasn't been our of seclusion since the late sixties! We need your help!!!

Send Pittsburgh Underground your pictures, videos, ANY information you might have on the whereabouts of Dead Zed Zombie!!! He needs nabbed and sobered up before Halloween night at Midnight so we can start Season 2 of Dead Zed Zombie on time!!! Stay tuned to PU as we bring you as much up to the minute info as we can during the desperate search for this little green A-hole...