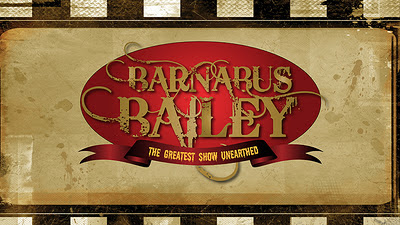 Greetings all you garishly ghoulish!!! It's Pittsburgh Underground's FAVORITE time of year again - HALLOWEEN!!! This year we're preparing our TRICKS for a very special TREAT for all you kiddies out there!

The premiere episode of Barnabus Bailey and The Greatest Show Unearthed starts this All Hallow's Eve at 10PM to be simulcast LIVE from the Hollywood Theater in Dormont, PA. Showcasing independent films in the spirit of "Chiller Theater,"(the late-night horror and sci-fi movie program hosted by WPXI personality Bill Cardille from the1960s until the mid-80s), yet breaking from the established horror movie program mold by focusing on indie films instead of classic public domain midnight movies.

Joining our old pal Barnabus will be the ever-so-lovely Rita Mortis and the reanimated head of Bob the Clown to provide chills, spills, and shrills to this show of shows! For the premiere event, Barnabus will be presenting indy horror flick, Welcome To Deer Creek directed by Jim Roberts of Blind Sight Productions. Check out this corn-fed conundrum!

An indy filmmaker from Ohio, Jim Roberts spares nothing when it comes to his resourcefulness when it comes to both story line and home brewed make up effects with this revenge tale that results in the ultimate zombie outbreak. Trust us - you'll never look at corn on the cob again after this horror yarn is spun!

THAT'S NOT ALL!!! Two horror classics will also be shown that night! The first is Abel Ferrara's 1979 horror classic, The Driller Killer - the grizzly story of an artist slowly goes insane while struggling to pay his bills, work on his paintings, and care for his two female roommates, which leads him taking to the streets of New York after dark and randomly killing derelicts with a power drill. Check out this terrifying trailer!

The second is one of Pittsburgh Underground's all time FAVORITE 80's horror movies - Return of the Living Dead by the late, great Dan O'Bannon. When two boobs from a medical supply warehouse accidentally puncture an army medical drum containing 2-5-4 Trioxin gas (along with a gooey-zombie) it sets off a chain reaction that awakens the dead and their hunger for BRAINS!!!

Return of the Living Dead (1985 Trailer)

THAT'S STILL NOT ALL!!! Barnabus will have SECRET and SPOOKY special guests yet to be announced including the Pittsburgh-based band River Runs Scarlet, who created the show's opening song and will be gracing us with a LIVE performance!!!