Artsy Fartsy Review: The No Name Players Present Mistakes that Madeline Made 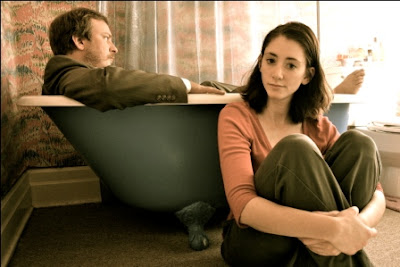 Hey gang! Well, our old friends The No Name Players are stinkin' up the joint once more and it smells like roses to me! I literally just got back from the final dress rehearsal of Mistakes Madeline Made and was too excited to sleep.

The short version: This rendition of the Elizebeth Meriwether play has the pungent stink of success all over it - seriously, The No Name Players are soaking in it.

Now the not too long, but slightly longer version of the short version.

Mistakes Madeline Made is only the second production that I've been lucky enough to attend, the first being the masterfully produced The Book of Liz that Chops and I checked out in June (see the PU review of The Book of Liz HERE).

This was the first time I had met with the incredibly talented producers, Tressa Glover and Don DiGiulio. They immediately put me at ease and welcomed me into the audience for an hilarious piece of entertainment in an underground style that Pittsburgh sorely NEEDS.

I was truely mezmerized at how six thespians could transform themselves so completely in roughly an hour and twenty minutes. The only way I can describe it would be if Pittsburgh had a home grown version of Canada's The Kids in the Hall. It was seriously that funny, that original - it was The No Name Players.

For the Mistakes Madeline Made, they take us to a totally different direction from the insanity of the Amish-ish-ness of their last production and into the basement of a wealthy couple named George and Judith.

That's all we need to know about this couple. They've got more dough than Little Orphan Annie's sugar-daddy. So much moola that they have actually hired a group of people that can only be catagoriezed as 'life-coordinators'. People that take care of the hum-drum details of their everyday life. For example: making sure your kitchen is stocked with your favorite breakfast food or making sure that you only have black bath towels for yourself and white ones for your guests.

These staff members become the focus of the story, specifically that of Edna played masterfully by Liz Roberts. Edna takes on employment in this surreal little hive of worker bees that takes care of the wealthy (and always absent) couple.

The character of Edna has an attitude about the tortures of mundane life that is within full reason of a sane person. Frankly, everything irritates her - her job, the men she dates (three very differnet writers - Drake, Jake, and Blake played by the Lon Chaney of Pittsburgh, John Feightner), and the people she works with (played by Tressa Glover and Don DiGiulo - more on them later!).

Edna moves back and forth from both the present and an extremely funny internal monologue she has with the audience to express these feelings of angst and also to talk with her brother Buddy (executed with supreme pathos by Todd Betker), a journalist who camped out in her bathtub for a week whilst having a nervous breakdown over a year ago from present day (ah... we've all been their Buddy).

The sad fate of Buddy becomes the catalyst for Edna's current condition that manifests itself throughout the play as a phobia, Ablutophobia, the fear of bathing. This truly sets up the tone of the humour in this piece, but only makes up one piece of a very manic puzzle in The Mistakes Madeline Made.

Now... on to our worker bees, Beth and Wilson portrayed by Tressa Glover and Don DiGiulo. I'm not sure where to begin. As I stated before, the first time I met Tressa and Don was in their producer roles during the dress rehersal of The Book of Liz this last June. Both warm and inviting people, I wasn't prepared for what can only be called astonishing.

Ladies first: Tressa Glover plays the role of Beth -  an overly happy, irritatingly motivated, rainbow filled nightmare that almost all of us have worked with at one time or another. Those people that never see the shadows for the sunshine and find ridicilous amounts of meaningful joy in the most meaningless of moments that most of us would pass off as routine. Finding the perfect hair conditioner or mapping out the quickest route to the grocery store, etc... 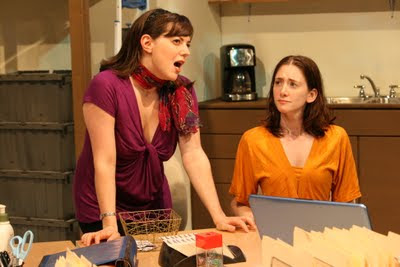 Tressa Glover had transformed herself into someone I wanted to strangle! It was a true testament to her acting chops as she is nothing like her doppleganger Beth - the high strung, hyper-proud, zippity-doo-daa singing, professional nurturer who annoys our fair heroine Edna beyond what should be capable of a normal office worker. In otherwords, I was blown away!

Don DiGiulo plays the office worker Wilson who is an experience that has to be both seen and hear in an acting alchemey that will knock you out of your seat. When Don first appears on stage to use the copy machine your ears won't believe what they are hearing. Nor will your eyes as Don DiGiulo's portrayl of Wilson is as manic as any Robin Williams, Jim Carey, or Max Headroom-Matt Frewer monologue that I have ever witnessed - just never live on stage.

Although suffering of a breakdown of sorts himself, Wilson finds an attraction to Edna that's both hilarious and heartfelt as it's put to the test due the increasingly foul stench of Edna throughout the duration of the play as they ban together to upset Beth's psyche by pilfering a box of consumables that's ment for the wealthy family they all work for.

The relationship that forms between Edna and Wilson is definitely a love story for the ages - a manically tourettes-like beat-box and his stinky, cock-lovin' (hey, it's from the play!) honey. All jokes aside - at the end of the play when Wilson goes through a lovely list he's compiled showing his affection for stinky Edna, the look in her eyes is what all guys secretly want to experience some time in their lives from the lady they love - not to get all mushy on you, but I did find it moving.

Mistakes Madeline Made (no, we aren't telling you why that's the title - you'll need to get to the play and find out for yourself!) is full of suprises, hilarity, pathos, and drama. It's an amazing mixture that The No Name Players cook up in a very touching way that will surprise and shock as well as highly entertain you at the same time.

Starting at 8PM (no late seating), Mistakes Madeline Made is playing at the Cathedral of Learning's PITT Studio Theatre through August 13th. You can get your advanced tickets here for $15 or just pay $20 at the door. Students are $10 with a valad student ID.

The No Name Players are one of the hidden jewels of Pittsburgh's underground entertainment scene and to miss them would be a damn dirty shame so please join them as they present The Mistakes Madeline Made - trust me, IT WILL be the filthiest thing you do all year!
Posted by Anonymous at 11:30 AM