Artsy Fartsy Review: The No Name Players Present The Book of Liz 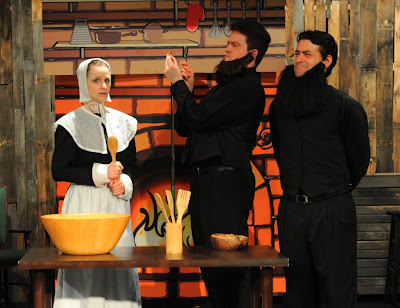 The No Name Players in The Book of Liz
(Left to Right): Gayle Pazerski, John Feightner,
and Jody O'Donnell
Before we get to our review for The Book of Liz presented by The No Name Players, I wish to welcome one and all to the first in a new ongoing series entitled Artsy Fartsy, Pittsburgh Underground's two cents on the Pittsburgh Art Community, it's happenings, our critiques (or reviews for the artistic impaired out there), and the like. With that said... lets begin. (Click here to continue article).

Each can feel taken for granted in their own ways. Each has their way of dealing either through the chaos of creation or through order of oppression - we pick our sides based on what side of the talent spectrum you're on - right-brain or left-brain. However, no matter what side we fall, each is as guilty as the next of taking each other for granted rather than appreciating what each of us brings to the table.

The Book of Liz, written by Amy & David Sedaris exemplifies the whirlwind that these two opposing forces can create, in one of the most entertaining and masterfully produced productions that we've seen in years. To experience not only the play, but also an evening with the No Name Players an old saying comes to mind: Never judge a book by it's cover.

Let's walk you through - the experience, shall we... (Click Below to Continue)

The Pittsburgh Playwrights Theatre located at 542 Penn Avenue in downtown Pittsburgh isn't what it appears to be. Namely a parking garage. That's right kids. If you would blink, you would miss it. Directly across the street from Heinz Hall, the Pittsburgh Playwrights Theatre is literally in one of the many hidden away nooks of our fair city. Unassuming to most, but containing hidden treasures within to those who dare go in search of it.

After a small stair climb and a visit to a large, somewhat spartan greeting area, viewers are taken into a very intimate, very cozy, darkened theater. The wonderful thing about indy theater is where it can take you before and during the event. Small theaters such as the Pittsburgh Playright Theater give you a true feeling of what 'underground' or 'avante garde' is all about - passion.

This type of passion becomes immediately apparent as curtain rises and you are magically transported from darkened theatre to the Squeamish community of Cluster Haven. For any of you who have experienced Pennsylvania's own Amish country, a place like Cluster Haven should bring back familiar memories of white bonnets, horse drawn buggies, and the delicacies like roasted beef heart, shoo-flypie, or cheese balls. That's right, yummy, mouth-watering, cheese balls...

The story, brilliantly produced by Tressa Glover and Don DiGiulio of The No Name Players, centers around Sister Elizabeth Donderstock, the creator of the world famous Cluster Haven cheese balls. Driven from her home by the machinations of the newest Cluster Haven resident, Brother Nathaniel Brightbee, who believes that the cheese balls would be better served  if they were created at the hands of man. Sister Donderstock then leaves her Squeamish home, and sets off on a journey of self-discovery and adventure.

The No Name Players first and foremost, need to be commended on the shear amount of characters that are portrayed (15 characters vs. 5 actors - you do the math!). Each is played with a conviction and sincerety that make them come alive before your very eyes. This is an experience that only the truly talented thespians can bring to the table and only an intimate venue like the Playrights Theatre can provide.

The players of this great play include Jody O'Donnell as Reverand Tollhouse, spiritual leader of Cluster Haven and resident pompous windbag. Jody also plays Ducan Trask, the 'effeminent' supervisor of the pilgrim themed restarant that Liz finds herself in after abandoning Cluster Haven. And finally the small (but very memorable)  roll of Visil, a mango-pants wearing swinger and one of Liz's new housemates. All Jody's parts are played with such conviction that he transforms seemlessly from scene to scene.

The same can be said for Kelly Marie McKenna who's hilarious performances as the gossiping Sister Constance Butterworth, the embittered waitress Cecily Cole (who's delivery with talented Jon Feightner in the diner is a sight to see!), and the nightmare enducing, white trash, cheese-ball hauling, Ms.Yolanda Foxley are burned in your brain after only one evening.

John Feightner not only plays the boarish antagonist of Sister Liz, Brother Nathaniel Brightbee, but three other roles with perfection. Whether a digruntled employee dressed like Miles Standish or swinging euro-trash (from Ukrania? Ukrania?), Mr. Feightner is an actor that is as versital as he is entertaining to watch.

The first thing I want to say about actress Allison Fatla who plays Ukranian femme fatale Oxana, Liz's first friend outside of Cluster Haven is that we loved your accent, not to mention your rendition of a certain famous food mascot - we quoted scenes from your opening scenes the entire way home! Also playing Doctor Barb Ginley, Liz's physician who's quest to help Liz's 'glandular malodies' make for good laughs for the audience.

Lastly, Gayle Pazerski as the title character of Sister Elizabeth Donderstock commands the audience as her big blue eyes, with their wide-eyed gaize makes you not only immediately sympathetic for the character of Liz, and drags you through every crazy-filled moment of her adventure with an honesty that only great actresses possess. Also, we loved her hamming it up the part of hunched over, million year old, Brother Hesikiah as well. Gayle Pazerski is one of rare gems and someone to watch.

The behind the scenes cast is just as masterful as the on-stage crew, with sight and sound that take you further into the emersiveness of the world of Cluster Haven. I was particularly impressed with the inventive set pieces by Alanna James who's simplistic yet effective take on enviromental design brings you further into the silly universe written by Amy and David Sedaris.

With that said, The Book of Liz starring The No Name Players is a must see for those of you interested in an intimate, fun-filled evening of underground theatre that might feel like a trip on a road less taken, but one you will ultimately want to revisit again and again.

The Book of Liz presented by The No Name Players runs from Thursdays through Saturdays starting at 8pm until June 25th at the Pittsburgh Playwrights Theatre.

Tickets are $15 in advance through ShowClix and $20 cash at the door.
Posted by Pittsburgh Underground at 5:28 PM