Announcement: Hollywood Theater in Dormont to Reopen in May 2011 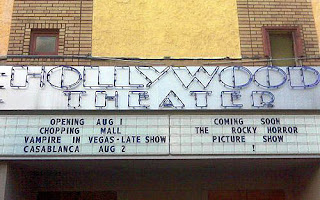 Hey everybody! Our good friends over at the Horror Realm have given us the heads up about the Hollywood Theater in Dormont which will be reopening on May 4th with a screening of the PBS Documentary The New Metropolis.

The Hollywood Theater is a non-profit organization who's mission is not only to open a mere theater to watch great films, but also as a community center where the public can enjoy everything from film festivals, concerts, and special events such as big screen viewings of sporting events and the Acadamy Awards.

The Hollywood Theater already has a commitment to another Pittsburgh favorite: The 48 Hour Film Festival and will be bringing back the popular 'Rocky Horror Picture Show' with shadow casting by the Junior Chamber of Commerce Players.

The Hollywood Theater is located at 1449 Potomac Avenue in the heart of Dormont's business district. For more information, contact John Maggio at 412 344 2958, and don't forget to check out the full press release below. Hope to see you at the movies in May! 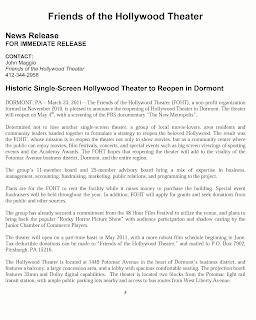