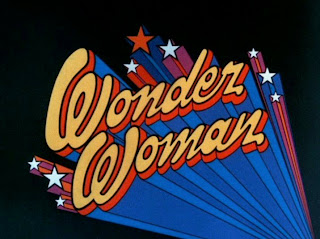 What you say? A NEW Wonder Woman series in the works?! Believe it or not, it's been a mere 35 years since our favorite version of Princess Diana aired on ABC starring Lynda Carter (grrrrowwwl!) in the title role.

Now with the debacle that was once 'Heroes' finally over and the poorly received replacement, 'The Cape' ending abruptly, NBC (who initially passed on the idea of our favorite Amazonian princess in her own series) has decided to give the concept a whirl, helmed by David E. Kelly (Boston Legal, Ally McBeal) in the hopes of recapturing the hearts and minds of fanboys everywhere (insert cynical sneer here).

The new series stars Adrianne Palicki (of  NBC's Friday Night Lights fame, the movie Legion) in the title role. Palicki has also been attached to number of other projects that sounded great, but never saw the light of day, including both Aquaman and Lost in Space pilots (the second being a John Woo project in which she would have played Judy Robinson). Adrianne's interest in comics comes from her brother, Eric Palicki, a successful comic book writer in his own right (Barefoot, Broken Boulevard) so her interest in the source material isn't purely skin deep which should make fanboys feel a bit better about her involvement in the project.

Something that a lot of fanboys were not thrilled about was the new take on the costume which most thought looked like a cheap Halloween costume. Based on the before and after pictures, changes have been made to both the color of the boots to fabric choices in order to remedy the cry of fans everywhere. 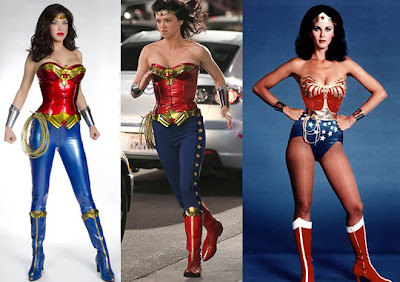 Our old pal Lee Moder who's credits include Legion of Superheroes, Stars and S.T.R.I.P.E., and his newest creation Shinku, started out his career many moons ago illustrating our favorite heroine. This is what he had to say about the new costume choices and the fate of the new series:
﻿
MODER: OK...When I saw that first photo with the new costume I thought that they obviously took their cue from the widely panned Jim Lee redesign...at least they nixed the Members Only jacket. I love Jim but sometimes I think his design ethic stalled out in the mid-80s. And I understand why. If this was a period series recreating the WW2 years of our Amiable Amazon I'd say put her in the standard red, white and blue one-piece.

Or, better yet, the one-piece with the star-studded miniskirt from her earliest adventures. But this series is taking place in the here-and-now...and, let's face it, that one-piece would look pretty damn silly. Think about: how many porn references are already hopping around in your fevered little minds. I'm just grateful that the producers had the good sense to change the material used for the pants. That PVC, or whatever it was, was just poor planning. Suddenly, Wonder Woman became an icon for a whole different type of fetishist. And thanks for bringing back the red boots; it's a better visual. I just wished they brought back the classic bird motif on the breastplate. If there was anything iconic from the old costume to use, that was it.

Now...I think a good alternative to what we have today would've been to Greekify the original costume; that is to retcon the one-piece into a truer form of body armor. Check out Darwyn Cooke's redesign for Justice League: New Frontier...it kicks ass. The only possible problem with this idea is that it could be accused of taking its cue from the costume for Xena; although it's obvious that Xena herself is a contempoary knock-off of Wonder Woman.

My biggest concern is the direction of this new TV series...I just don't know enough about it to make a call. My hope is that they banish all thoughts of camping it up, concentrate on the mythological angle through reinterpretation and, for god's sake, give me action! There hasn't been any over-the-top lady ass-kicking on the tube since Buffy (the Vampire Slayer) went away. In today's kill-you-before-the-second-episode world of Network TV I say pull out all the stops and just ape-shit with the action. They have nothing to lose and, quite possibly, everything to gain.

Shooting has already started, as Adrianne and the crew were spotted in Hollywood on March 29th, filmed by 'WonderboyLB". Check out the footage below:

The gang here at good ol' PU will be keeping our eyes peeled and ears to the ground on this one. Although Wonder Woman is one of our favorite icons, NBC is notoriously consistant when it comes to screwing up a good thing and proving themselves completely clueless in the process every single time. Cross your fingers and hope something wonderful happens despite NBC's track record.
Posted by Pittsburgh Underground at 6:57 PM