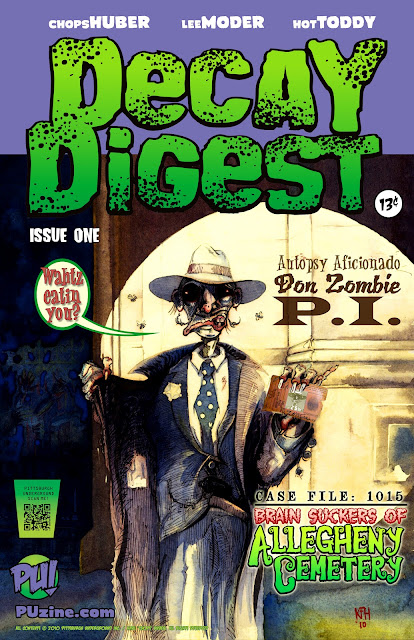 Hey kids! You've heard the tease and now it's time to please... We at Pittsburgh Underground bring you the FIRST, of our monthly PU Pulp Posters! Entirely FREE and your's to download, print, and share with friends, foes, and everyone in between.

For our inaugural poster we present to you our origial zombie comic book cover Decay Digest, Issue One - Don Zombie P.I. with EXCULSIVE artwork from our very own Karl 'Chops' Huber. Unky Chops has toiled late in the lab to concoct this comic cover of cataclysmic calamatiy!!! Old school ink and watercolor went into this mixture to put the dead in Don Zombie P.I. (an original character from Professor Huber's rabid reasoning!).

Also, because it's FIRST EDITION FRIDAY (ok, fine I made that up), Unky Chops has also dredged up a doom filled depiction of Don Zombie P.I.'s  Case File 1015: Brain Suckers of Allegheny Cemetery as a short narration to get you in the mood... to suck brains (SUCK BRAINS!!!).

Remember to check back with us every month for a brand new PU Pulp Poster EXCULSIVELY on good ol'  Pittsburgh Underground!!! Now to 'Read More' of this tall tail from Unky Chops, well - you know what to do!!!

UPDATE: This PU Pulp Poster has been UPDATED as of August 3rd, 2012 to include revisions to our QR Code and Website Address - PUzine.com -  Download and print this PU Freebie and hang it on your fridge, stick it to your skateboard, glue it to your little sister's head - THEN use your smartphone to scan the code to follow Pittsburgh Underground wherever you are!

It was pitch black and pissing in the Steel City that evening. The night air was full of danger for both the living and the undead as Don Zombie, private investigator, loosened his tie, adjusted his hat, and shambled haphazardly up the gravel entry. 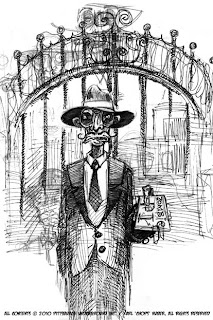 A crumpled note shoved inside the rusty lock of his basement office lead him to his next case located in the heart of old Allegheny Cemetery. The runny ink splathered ramblings about a voodoo curse, mind manipulation, and something that looked like a recipe for brains flambé.

Monsters, demons, the occult, the Boogie Man. So waht! This was old hat for a seasoned vet like Donny Z. Besides, it wasn’t what the note said or the expensive paper it was written on that gave Don Zombie cause for alarm. It was the trace scent of an exotic perfume that emulated from the page itself along with the elaborate, yet sloppy penmanship of what could only be a damsel in distress that made his skin itch and his tummy groan.

As Don shuffled to the main gate of the darkened cemetery grounds he starred expressionless through the twisted metal decoration. It may have been the heavy rain, the fog covering the ground, or the lack of eye balls that made the lights waver in the moonlight as he approached the entrance of the cemetery. 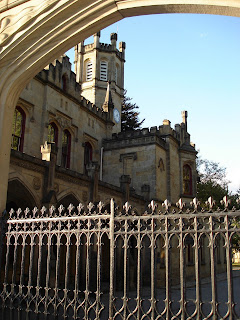 The gate, of course, was locked. Trying to find a grounds keeper during the night of a Pittsburgh monsoon seemed unlikely. Turning around slowly to look for another possible entrance, a jaundiced light of a patrol car head lamp framed the walking corpse in a glowing halo of yellow. Casually checking his watch, Donny Z realizes he hasn’t worked among the ‘living’ in years, but the motion from the patrol car is a reassuring and familiar gesture amongst ‘blood pumpers’. In keeping up with appearances, Don scrambled through his many pockets to remove his license and I.D. while carefully checking his Webley 1915 revolver tucked in his belt. 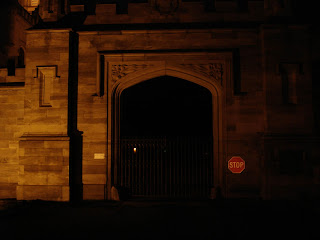 
As rain fell harder and the tree branches bent low, the garbled sound of Don Zombie’s voice called out the officers on duty with a friendly, ‘So wahts eatin’ you?’ At first, dead silence with only the faint buzzing of flies swarming around his rotten head. It wasn’t Don though that kept the officers frozen gaize. Further down the road the soggy ground moved, heaved, and rolled over on itself as a disgorged hand followed by an arm. Finally, and ever so slowly, a hoarse groan, the then... the rest. Crooked and filthy, the form moved toward the gate and joined a gang of similar ghouls, sliding, dragging, toward a dull yellow light in the near distance… Brain suckers with only Don Zombie, P.I. between them and their midnight snack...
Posted by Pittsburgh Underground at 2:53 PM