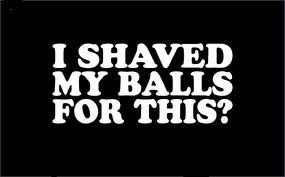 You heard us right kids! BALLS!!! They come in different sizes, colors, and textures. They can make noise, bounce, roll, or spin. Some glow, some shine, and some even write (ball point pens - duh!). That's right balls are EVERYWHERE! It's practically an epidemic! You can't walk five feet and not run into BALLS!!! The planet we all come from along with our very own moon and sun are shaped like gigantic BALLS!!! We are a ball-centric people and without them we'd all become orbless degenerates, gaizing into midnight sky at our Borg-like moon, wanting for something more out of life - namely, the want, the need, the desire for BALLS!!!

With that said, we would like to feed your spherical obsession this week with new products that rely on the ball as it's main component, making up it's overall form. So get ready! Get set! Play BALL!!!

Shock Ball
Remember the good old days when you and your friends would go outside to play any number of games that only required that of a good set of balls. From dodge ball, tether ball, or even a rousing game of catch - all it took was a nice set a spheres and you and your friends could go at it all summer long.

Hot potato was one of these games that only required a few friends and one ball to pass between you. As legend tells us, in 1539, Filius Giles of North Southwesteasternshire nabbed a hot chunk of lead dipped in lard (called a pohtaytoh by blacksmiths) and threw it with using some tongs at one of his friends. That person caught it and then repeated the process. Eventually it evolved into the game we all know and love. 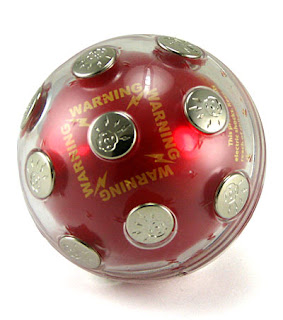 We Dare You To Teabag This One

Now the gang at ThinkGeek has created their own take on the old-school game. Shock Ball is just that - a ball with electrical nodes that cover the surface of the ball that give random electrical shocks to one unlucky handler as it's passed between players. Considered a novelty for adults (but lets face it, a fun prank to play on that smart ass kid you've been wanting to get revenge on), this electrifying new toy can be nabbed right from their website for around $13.99. Not a bad price for a shock to the system!

Designer Felix Harmood Beck created a new take on the auditory prank. The idea is genius - simply record the sound of your choice on the Soundbomb, hide the device, and then surprise passers by as it's motion sensor blasts your recording at full force. 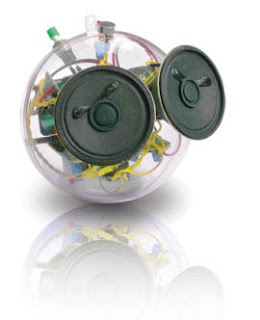 The genius of this product not only comes from it's innovative, spherical design, but also in how the item is marketed by Beck. The device isn't for sale for just anybody. Felix rations out the Soundbombs on a need-to-have basis. He wants to know what it's used for and if it sounds good enough he'll send you one (seriously, isn't scaring the crap out of people a good enough reason?)

Exploding Piggy Bank
No discipline when it comes to saving? Trying to teach you kids a lesson on how to pinch them pennies? Well, the good folks at Takaratomy have come up with a device that was custom made for those folks who need more than a good reason to start saving those coins. 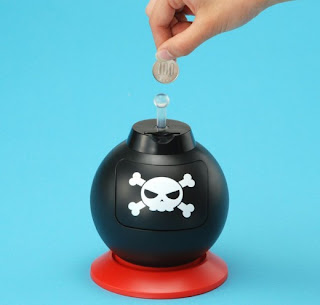 Miss your daily deposit and this black beauty will start to vibrate. Ignore it some more and it's lights begin to flash and then BLAM!!! It explodes sending your coins everywhere! This explosive extravaganza even has a party mode for those of you who want to tempt fate with friends to see who gets a couple of Lincoln's stuck in their crown! Originally only available in Japan, but the gang here at good ol' PU found Audiocubes - a great site that carries a lot of Japan's hard to find items. For about $56.00, you too can be monetary menace in the comfort of your own home!

Nothing
That's right kids - for our final foray into the wide, wide, world of balls, we bring you... nothing. Do you have one of those 'special' people in your life that when a birthday, anniversary, or holiday comes up repeatedly state that they want 'nothing' for the occasion, only to act like rabid animals when you give them exactly what they've asked for (a real ball - and a chain to go with it)? Well, this time you can give them nothing in a tangable, spherical package. 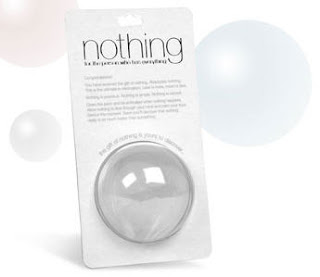 Exactly What They Deserve

Filled to the brim with nothing, this loving gift can be purchased on I Want One Of Those.com for around $6.00 - seriously, that's a whole lot of nothing in such a tiny package!

Hope you had a ball with this weeks Geek Gear - till next time, keep them hands out of your pockets kids!!!
Posted by Pittsburgh Underground at 11:59 AM