For those of you unfamiliar with this amazing series (get your tail to a comic book shop pronto!) it's mainly about the central character, Sheriff Rick Grimes, who wakes up in a hospital after being in a coma, only to find the entire world has gone to shit due to zombie apocalypse. FUN!!!

For those of you who are familiar with the Image Comic, the big talk is whether or not AMC has the nuts to create a series as compelling as Robert Kirkman's source material. Well, the story remains to be seen (the TV is filming now and scheduled to debute in October of 2010), the images speak for themselves. 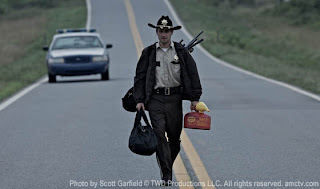 Rick Grimes the original / Rick Grimes played by Charlie Adlard
Inspired by the amazing artwork of both Tony Moore and eventually Charlie Adlard (from issues seven and onward), these two newest photos of actor Andrew Lincoln playing the lead charcter of Rick Grimes and his grisley friend (I think it's being played by an Olsen twin?) are spot on and appear to be proof that AMC isn't skimping in the look of the series. 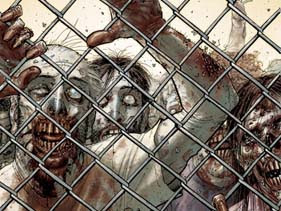 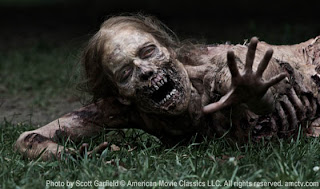 Both Versions Include Chronic Halitosis
The gang at PU is waiting on pins and needles for this one kids - we'll keep you updated as more info is available. Also, stay tuned for our Comics To Rot Your Brain review of the entire Walking Dead series.
Posted by Pittsburgh Underground at 8:21 PM