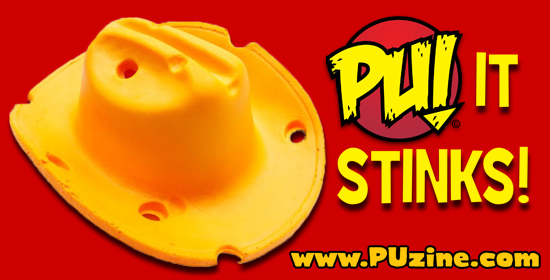 If you live on the Northside of Pittsburgh you put up with some minor inconveniences. Between the madness of any July 4th weekend or random sporting event at either of the two stadiums, to dodging the drunks staggering their way out of the Rivers Casino (or as we call it, the eyesore of the Ohio River), or any miscellaneous neighborhood affair from the Northside House Tour and the Mattress Factory Garden Party that makes our already crowded neighborhood even more congested, noisy, and just plain hard to get around depending what season we're in.

Most of the folks that do live in the city of Pittsburgh (meaning ‘in’ the actual city of Pittsburgh) reside there because we love the urban lifestyle - great food, well maintained parks, museums, theaters, and libraries all in walking distance from your home. There is a real sense of community here and most people who live in any neighborhood in Pittsburgh have real pride for our city. We want to keep it clean, friendly, civilized and still enjoy all the best Pittsburgh has to offer in the process.

One of the lowest points of summer comes this weekend in the form of what most Northsiders call the Kenny Cheezy concert, which is being held this weekend at Heinz Field. This will bring in a swarm of hillbillies from the outlying areas of Pennsatucky to descend on our fair city like flies attracted to a rotting corpse.

In 2014, the concert was not held in the city of Pittsburgh due to the mayhem, trash, and total destruction that lay in it’s wake in 2013 from the hill-folk who’s baser instincts took over, acting no better than mere animals when let out of their pens for a day in actual civilization..

Hillbilly Fight At the Kenny Cheezy Concert At Heinz Field (2013)

Now for anyone who thinks that’s too harsh, let’s look at the statistics. In 2013 police stated that 49 people were arrested inside Heinz field during the concert, with another 24 arrests taking place near and around the North Shore stemming from disorderly conduct, public intoxication, and aggravated assault.  Additionally, 10 large fights broke out and 150 people were treated for various medical needs with another 45 people taken to medical facilities.

“The Kenny Chesney crowd is the most difficult crowd for our staff to work with of any of the events of the year,” says Merril Stabile, president of ALCO Parking.“We had a hard time getting police — a lot of police didn’t want to work this event,” Stabile said. 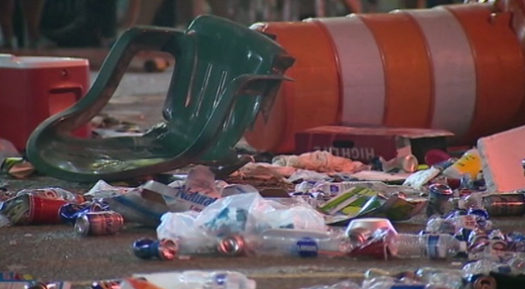 That’s not all - Stabile was also quoted as saying that Chesney's fans generated five times the trash that Steelers fans leave behind even though only 49,000 attended the show, while the Steelers -- who sell out every game -- draw about 66,000 fans, including a large tailgating contingent, Stabile said.

When visitors left the June 22nd show, an estimated 60,000 pounds of garbage in parking areas around the stadium. This took workers roughly 15 hours to collect trash and up to 12 hours the year before. Leaving our city in a heap of disease along with the overwhelming smell of urine flowing through our streets does not exemplify Pittsburgh pride.

Mayor Bill Peduto (a mayor we can all be seriously proud of) has stated that when concert events are held in Market Square in the center of downtown Pittsburgh citizens actually stay later to help clean up (which we’ve been witness to and taken part in as well). So what’s the difference between venues? It’s that the majority of participants who venture into the center of town to take part in these events are actually from Pittsburgh - true Pittsburgh residents that love and care for the city they live in. The majority of the Cheezy fans are not from Pittsburgh. They exist in the rural areas that surround Pittsburgh, that evidently has never been taught the concept of basic human decency, let alone how to behave when occupying a place you are merely visiting for the afternoon. 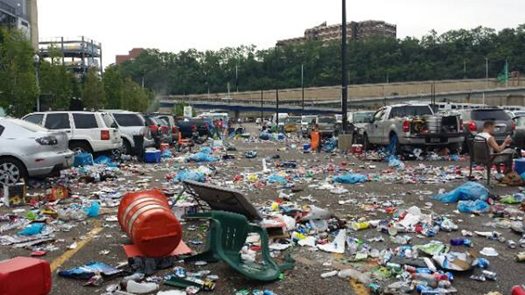 Why Kenny Cheezy Fans Are Not Welcome In Pittsburgh / 2013

Kenny Cheezy and his fans are more suited for the First Niagra Pavilion (or whatever they are calling it this year) in Burgettstown, PA where they can defecate on one another, set the stage on fire, and beat each other to a drunken pulp. Unfortunately, for obvious monetary reasons, Pittsburgh has opened its gates once more this Saturday for the inbred to hoot n’ holler,  but with new rules that have been put into place by Mayor Peduto as an attempt to control the chaos that will most likely ensue. This includes new hours for when the madness can begin, when it has to end, who can tailgate and who can’t, and a directive to hand out trash bags in the hopes that the hillbillies will use them for more than mixing moonshine in.  You can view these new rules, including road closures due to the event on The City of Pittsburgh’s Official Website.

For those of us living here in the Northside of Pittsburgh, we will be forced to begrudgingly tolerate Kenny Cheezy’s fans again as the infestation of flannel, cowboy gear, tobacco spit, garbage, vomit, and urine grace our fair streets once more.  And despite what you may hear in the media from the folks running the venue (and making all the money from it as a result), the residents of Pittsburgh that live and love our city hope you screw up again so we can finally be finished with you for good. Based on past experience we don't want ANY of the Kenny Cheezy fans back again because to put it bluntly...