Fundays At 420: The Lone Ranger - Blast From the Past 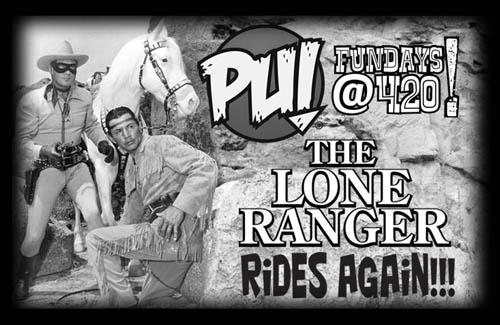 Howdy kids! It's time for another Fundays At 420 here at Pittsburgh Underground! Today we wanted to do a tribute to one of the great American mythological heroes - The Lone Ranger!

Created by writer Fran Striker and station owner George W. Trendle in 1933 as a broadcast radio program on WXYZ in Detroit, Michigan, The Lone Ranger and the noble savage Tonto have roamed the west righting wrongs both big and small for the last 75 years.

Although the story is updated from time to time, the basic premise always remains the same. A posse of six members of the Texas Rangers are ambushed by a band of varmints led by Bartholomew 'Butch' Cavendish. Tonto stumbles onto the scene, rescues the only survivor, John Reid and nurses him back to health. Among the rangers killed was John's older brother Captain Daniel Reid. Tonto creates a black domino mask out of the leather from John's brother's vest in order to conceal his identity as they go after the Cavendish gang to bring them to justice. Reid continues to fight crime under the alias of the Lone Ranger.

From there, the character spun off into every form of media available - newspaper strips, comic books, cartoons, television shows, and movies. Today, good ol' PU wanted to feature a few of these clips that span the last seven and a half decades, including the first original radio broadcast from 1933 and the famed television show starring Clayton Moore and Jay Silverheels that ran from 1947 to 1959.

So don't wast time just standin' there! Click on the link below to view all the Lone Ranger awesome sauce! Hi Ho Silver! AWAAAYYYY!!!...

The Legend of the Lone Ranger (Trailer 1982)
Universal Pictures