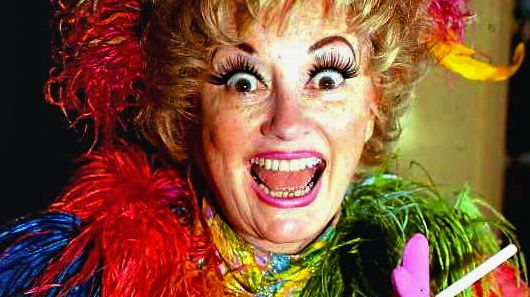 Greetings to all our ghouls and fools! It's time again for another Fundays at 420!!! This time we wanted to pay tribute to an amazing woman who left our world this past week - the late, great Phyllis Diller.

Ms. Diller would have been right at home here in the Pittsburgh Underground with her fright wigs, 'hubby' Fang, and that witchy laugh all rolled up into one big beautiful package! An advertising copywriter turned stand up comedian, her career spans as far back as appearances on You Bet Your Life with Groucho Marx, The Tonight Show with Jack Paar ,and Laugh-In.

From roasts to TV variety specials like Ed Sullivan Show, The Dean Martin Celebrity Roasts, The Gong Show, The Muppet Show - Diller did it all! Our favorite memories of her go back in time to the 60's and 70's in the stop motion feature from the 60's Rankin / Bass classic, Mad Monster Party where she stared with Boris Karloff, the New Scooby Doo Movies (where of course she guest starred as herself) fast fowarding to the new age of animation where she worked on A Bug's Life, Robot Chicken, King of the Hill, Powerpuff Girls, and even Family Guy!

Phyllis Diller was a great woman that can never be replaced - a classic who is revered by all of us at Pittsburgh Underground and the world over. Click below to relive some of our favorite moments with this amazing lady throughout the years.

CLICK HERE TO CONTINUE
TO ALL THE PHYLLIS DILLER FOOTAGE!!!

Phyllis Diller with Groucho Marx
You Bet Your Life (1957)

Email ThisBlogThis!Share to TwitterShare to FacebookShare to Pinterest
Labels: Artsy Fartsy, Fundays at 420