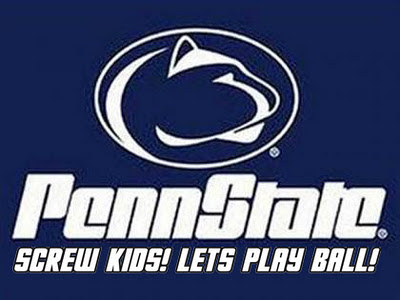 Here at good ol' PU, we rarely get into political or religious discussions. We turn a blind eye to sports as well - it just doesn't seem as interesting to us as zombies chasing cheerleaders or flying monkeys pestering the mailman (what can we say - even we have our standards). However, in light of the recent child molestation debacle that's happened at Pennsyl-tucky's newest state capital - State College, PA we figured we might as well put in our two cents. 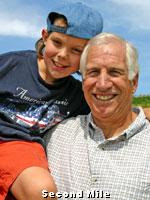 For those of you living in a cave, former Penn State Coach, Jerry Sandusky was recently charged with sexually abusing 8 young boys over a period of 15 years through his 'Second Mile' charity founded in 1977  for troubled young men. In essence, this award winner had access to hundreds of boys who were incredibly vulnerable due to their 'social situations'.

With Sandusky buggering young boys for over a decade and the fine folks within the Penn State organization covering it up in the process it was merely a matter of time before it caught up with them resulting in Sandusky's arrest and the firing of the university president, two top administrators, and of course - beloved Penn State coach, Joe Paterno.

The fun doesn't stop their kids! To show their blind obsession with football, support of their beloved Jo Pa, and their obvious love of man on boy rape, the award winning students of  Penn State got together to show that if you can bone em' you can at least thrash them! Check out the carnage from our future leaders of America - the students of Penn State.


What's not to be proud of right! Keeping life in perspective is evidently the first thing that Penn State students learn and we think those videos truly show what matters to them. Don't believe us - check out this footage from B.S.of A.

The B.S. of A: Penn State Riot Coverage


I know I know, we here at PU thought that maybe Penn State might be getting a bad rap about all the bad rape that was going on, prioritizing their love of football over the eight victims in the man on boy sex abuse scandal, but then we found this NBC footage of Satan as he made a guest appearance on Saturday Night Live's Weekend Update. Check out what he had to say.

Ok...well... never mind. Turns out that even the devil is offended as the rest of us. Well I suppose that cinches it. An indelible mark has been made on the Penn State organization and even minded students that grace their halls. Their legacy - putting the game of football at the forefront, even if it means sacrificing a few children in the process. Nice work Lions and incidentally...

PU IT STINKS!!!
Posted by Pittsburgh Underground at 11:30 AM