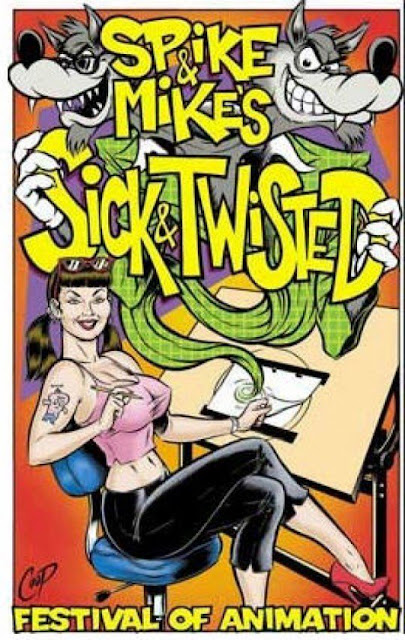 Hey gang! It's that time again - another Fundays at 420 segment! Way back in the good ol' days, the gang here at Pittsburgh Underground would love to attend Spike and Mike's Sick and Twisted Festival of Animation when it came to the 'burgh.

The festival started by Craig 'Spike' Decker and Mike Gribble in 1990 at the Wheeler Auditorium at UC Berkeley, this fun-filled extravaganza has been the main stage and spring board for up and coming animators such as Tim Burton, Nick Park, Will Vinton, John Kricfalusi, and more.

The shows have toured theaters, college campuses, and film festivals such as Cannes, Sundance, and Annecy. Sadly, Pittsburgh has not seen one of these wonderful events in quiet a while, but it still rages on in California, Utah,  and even Norway!

With that said, we wanted to put together a smattering of toons that have toured with Spike & Mike in the past. Here are 10 features from Spike and Mike's Sick and Twisted Festival of Animation to tickle your funny bone!

For more information on the amazing Spike and Mike's Sick and Twisted Animation Festival, just check out their Official Site. Hope you enjoyed this week's Funday's at 420, and don't forget to join us again for more of the fun stuff here at Pittsburgh Underground!


Have A Great Funday Everyone!